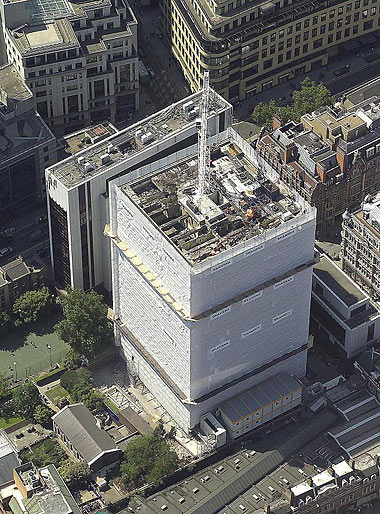 Work on this building in the City is now complete. The main contractor was Skanska and demolition on-site was being undertaken by John F Hunt. GKR Scaffolding was awarded the full scaffold contract which involved four external elevations to the main building whist cladding was removed and replaced and two existing storeys were removed and replaced with five new storeys. The building was originally 14 storeys high.

Commenting on the Dashwood Project, Director Lee Rowswell says: “Clearly, this was a significant investment but the programme on this job demanded that we were able to move scaffold quickly and efficiently but most importantly safely. Using HAKI modular we had the benefit of fewer components to move around on-site and the longest component was only 3m in length as opposed to the standard 6.5 m scaffold tube. This made it easier to move by hoist meaning we were able to save on labour time and also operate a safe system of work.”